Macarons!  Not those coconut macaroons that might come to mind, but Parisian macarons.  They are gorgeous little bites of heaven, in any flavor under the sun.

I picked up two while I was in Paris and promptly ate them.  It is a fun surprise to find out what is inside since the only way to tell is to guess from the color of the cookie.

Here is what I picked up:

Now, the cutest things you’ve ever seen are mini-macarons.  The ones I picked up in Paris were about 4 inches wide.  They were certainly tasty, but the small ones lend themselves to trying several different flavors without looking too much like a pig.  And in that spirit, I picked up a little box of 7 mini macarons from La Maison du Chocolat at the airport.

Aside: Is anyone else sick of cupcakes?  I think if I lived in a big city where I could stop in for a cupcake and a coffee, I might warm up to the idea.  Don’t get me wrong, they are tasty, and they are fun to decorate.  But they are everywhere!  I mean, Cupcake Wars?  It’s like the twilight zone.  Macarons are dainty and delicious.  And, dare I say it?  Sophisticated.  Snobbery done for the day.

My friend Breanne came to visit the day after I returned from Paris.  We pretty much attacked those macarons, especially when she found out they are made without white flour.  She is a whiz at making Primal recipes of things you really don’t want to miss when you go Primal.  I’m not there yet, but this post is dedicated to Breanne, who can now put her spin on these macarons.

I used a recipe for French Macaroons with Raspberry Rose Buttercream that a friend suggested from Bon Appetit magazine.  I have discovered the secret to perfect little cookies, and you’ll thank me once you find out how easy they are.  You’re welcome.

First, I set out several different batches of egg whites and butter when I came home from work for lunch so that they would be room temperature by the time I was ready to start after 5:00 pm.  I kept them separate so I would be ready to go.

Next, I sifted 2 cups of powdered sugar and 1 cup of almond flour into a bowl.  I found almond flour in the natural food section at Kroger, for any curious Oxonians.

Next, put 3 egg whites (1/2 cup, but it is beyond me how to measure egg whites) into a stand mixer with 2 tablespoons plus 1/2 teaspoon of sugar and a pinch of salt.  Beat on high until medium peaks form.  I also added a little red food coloring to the egg white mixture to color the batter, since the cutest thing about macarons is that they come in lots of colors.

Fold the egg white mixture into the sugar/almond flour, then put into a pastry bag fitted with a regular tip.

Here is the key to making perfect macarons!  Make sure the batter drips from the tip of the pastry bag.  It is the only way that they’ll spread on the baking sheet to create a smooth surface.

Pipe the macaron batter out onto parchment paper or silpats/exopats (that’s what I have here).  The recipe says to keep them 1 inch apart, but this was the first time I’ve used a proper pastry bag (not a Ziploc bag) and they are certainly not evenly spaced.  I also piped in a spiral, from the inside.

Let these sit for 20 minutes, then bake for 5 minutes at 375 degrees.  Reduce heat and continue baking at 325 degrees for 1o more minutes.  They will be “puffed and golden.”  I couldn’t tell about the color because mine were pink, but the mark of a macaroon is the “foot” that expands at the base of the cookie.

While these are baking, start the filling.  Place 4 cups of frozen raspberries and 1 cup of sugar in a sauce pan and bring to a boil.  Cook until thick and measures about 1 1/2 cups.  The mixture will thicken and reduce and will jump out of the pan at you!  Be careful, it’s hot! 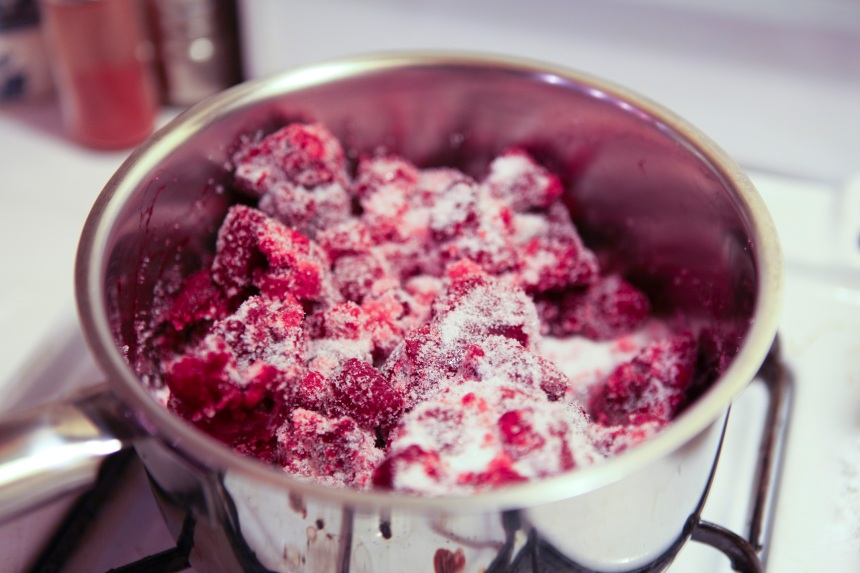 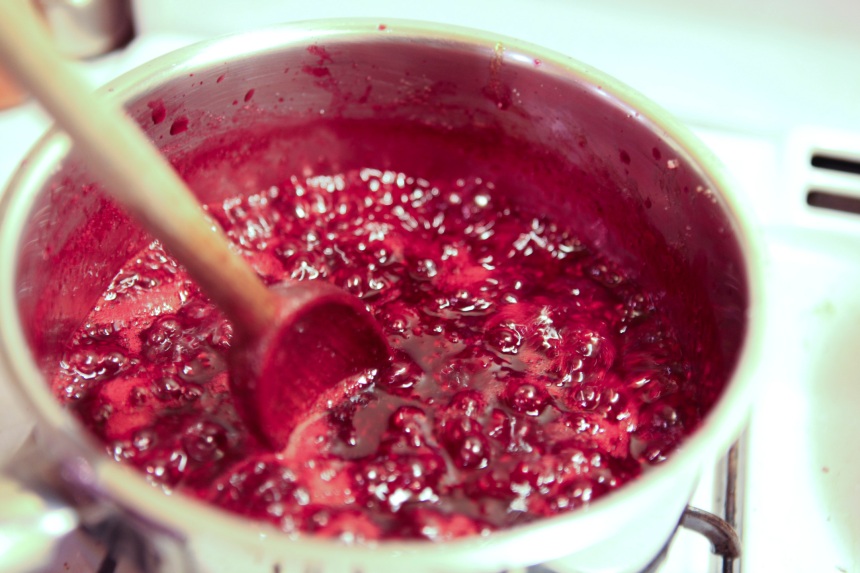 Strain 1/2 cup into a bowl and keep the rest for later. 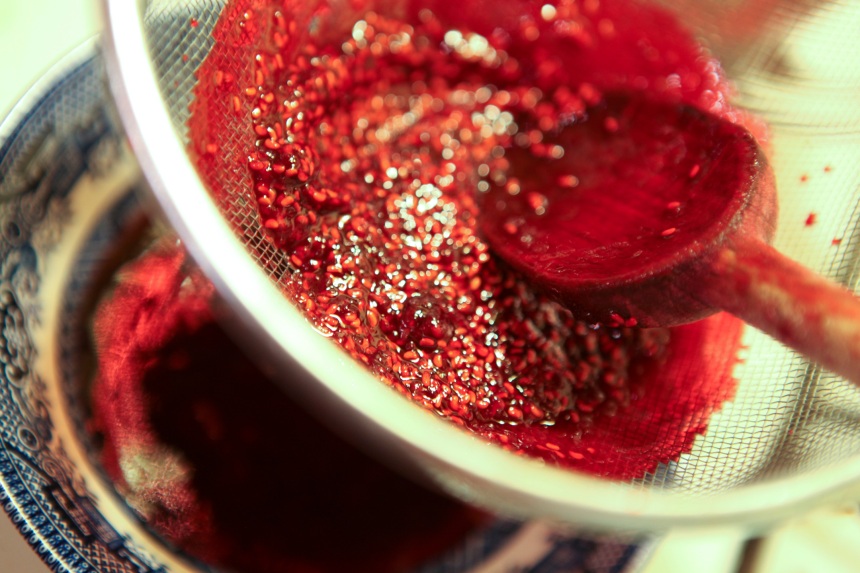 The macarons should be about done by now.  Pull them out and let cool while you make the heavenly buttercream icing.

To start the icing, combine 2 egg whites, 6 tablespoons of sugar, and 1/4 teaspoon salt in the stand mixer bowl and place over simmering water.  Put a candy thermometer in the bowl and bring the mixture to 140 degrees while stirring occasionally.  It won’t take long to get to 140 degrees.

Transfer the bowl to the mixer and beat until stiff peaks form.

Add 10 tablespoons of butter, 1 tablespoon at a time, until it is all mixed in.

It says to add rose water at this point, but I didn’t have any so I skipped that part.  In fact, there was none to be found in Oxford, MS.  So, add 3 tablespoons, one at a time, of the strained raspberry jam while it continues to mix. 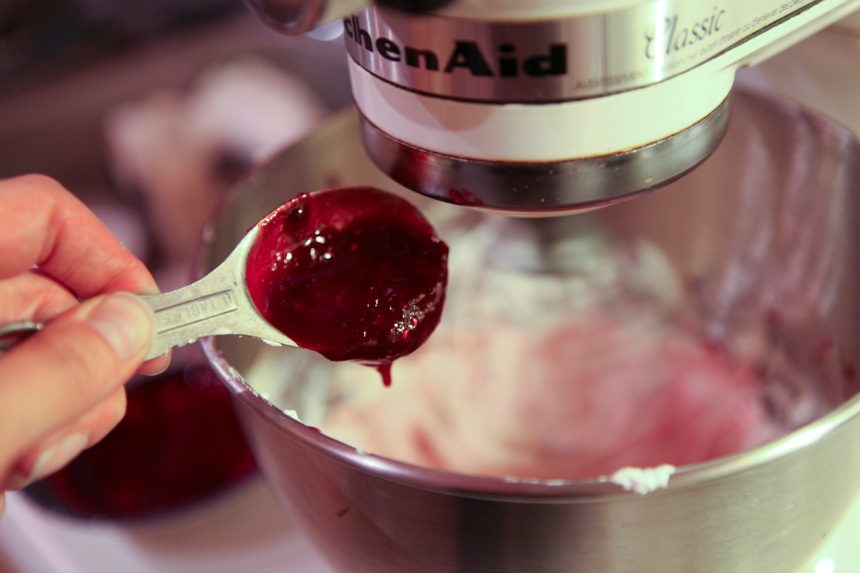 When the raspberry buttercream icing is well-mixed, spoon it into a pastry bag.  Then lick the bowl.  Yes, all of it.

Turn your attention back to the macaron cookies.  Pair similar-sized ones together and spread some of the raspberry jam on one side.

Then, use the pastry bag to spread raspberry buttercream on the other side.  When finished, squeeze the remaining contents of the bag directly into your mouth.  You know you want to. 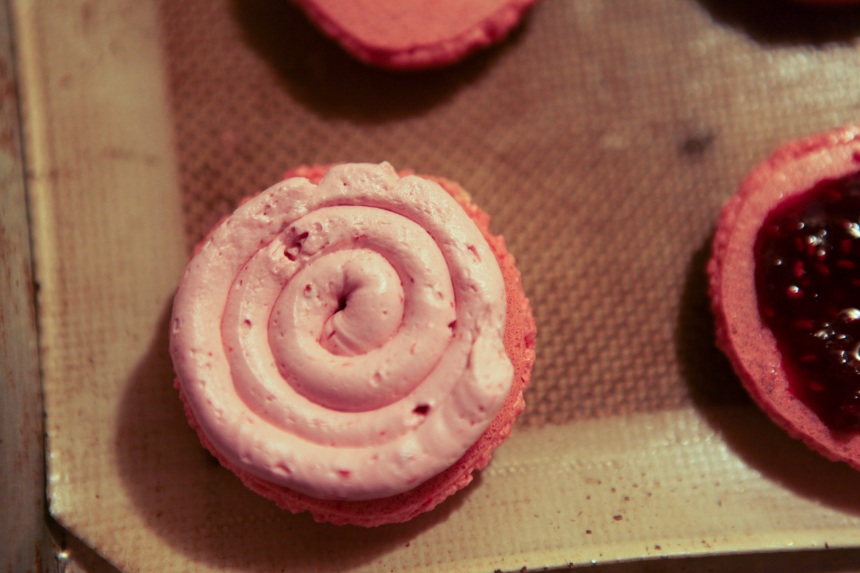 Finally, just put the two sides together and enjoy!  I personally think they taste better the second day, so they would be a great little housewarming gift or happy for someone you really want to impress.

Pride goes before destruction, and that’s exactly what happened on May 11, 2011.  As I was feeling confident and pleased with myself, laughing at every fool who can’t get macarons right, I decided to try another recipe for pistachio macarons.  Here is what happened.  Lesson learned.

I will spare you the steps taken to make these, um, wonders, but I will say they were tasty.  This is the perfect case of the batter being too thick to create a smooth cookie.  Don’t make my mistake.  You may end up with pistachio macarons that look like, well…

Next up, cooking with lavender.  I want to make a purple macaron, with a lavender and honey filling.  Sounds good to me.